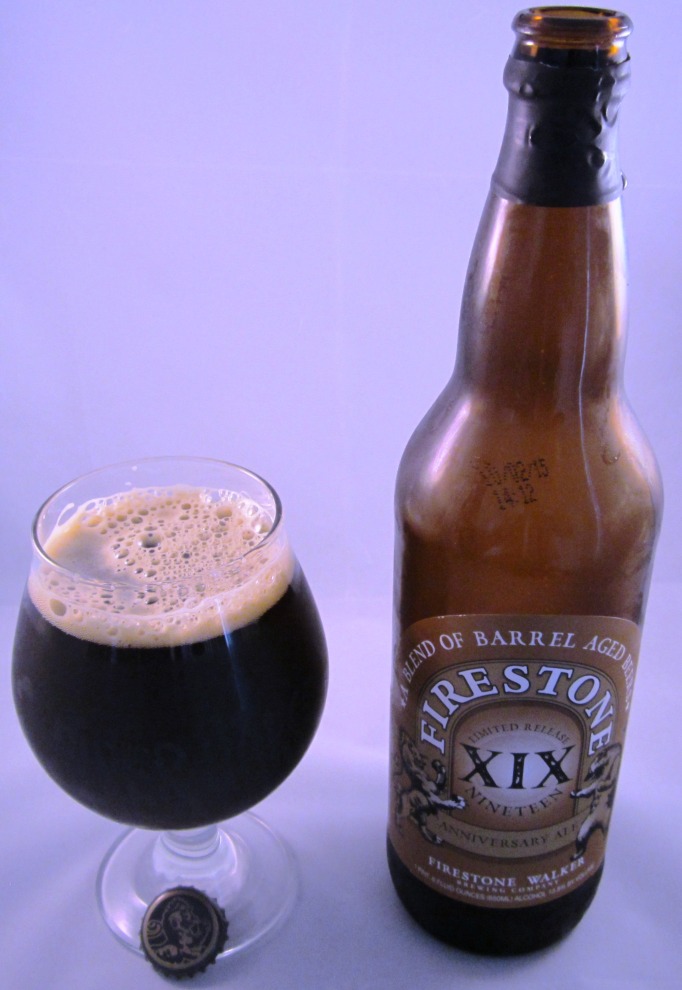 S:  The body fills into the glass as a walnut, mahogany orb, nearly black.  The bottom sports orange tints, the meniscus counters with a light aubergine.  The head, a dense, foamy taupe cap builds and dies.  What’s left is a tight ring at the outside of the glass, full of bubbles.  An archipelago of small bubbles floats in the center.  Small brown particles (FW warned drinkers ahead of time) settle to the bottom.  Carbonation is visibly undetectable.

A:  First and foremost, the barrel-aged aspect of the aroma, front and center:  vanilla and a slight oaky, earthy tobacco.  After consideration and a swirl, one might also take in coffee, dark chocolate, fruit cake, coconut, and a slight spiciness.  Warm, piquant booze sends a tingle up the nostrils.  In the middle of it all is a very subtle pine resin.  All in all, a multi-layered aroma giving evidence of each of the four beers in this celebratory concoction.

T:  Wow, so much happening, I doubt there’s any way I’ll catch it all.  Much of the aroma carries into the palate.  The coffee, chocolate and fruit cake are easiest to pick out.  New flavors, not in the nose are here too, such as a rich molasses (thank you Stickee Monkee), and fleeting touches of caramel (and thank you Bravo).  Delving further into the structure, there’s also a soft anise/black licorice feature (Dr. Parabola, I presume?).  Though a massive sweetness sticks around through mid-palate, it leaves after a while, providing a drying, tannic, oaky finish.  The finish itself is long, and certainly feels like the smooth burn of brandy, and the vanilla of bourbon barrels.

F:  Thick, oily and coating.  Heavy on the palate, with just enough lift from the carbonation.  Chewy (there you are, Mr. Merkin).  As it warms it gets almost too heavy… almost.

O:  This one deserves contemplation, as Firestone Walker has done it once again.  This beer is greater than the sum of its parts.  Each sip and degree of temperature change brings something new.

Suggested food pairing: if you must… sharp cheddar cheese, hearty beef stew made with a splash of whiskey… but really, this one deserves full attention.  Enjoy it on its own.

S:  Pale straw with a slight golden hue dazzles in the early morning sun.  The head, off-white, builds to a dense quarter-inch and sticks around for a long while before relaxing into a tight ring.  Lacing is consistent and bandy.  Lazy bubbles rise to the surface from the base of the glass.  They seem to sense it’s a Saturday, and take their time.

A:  A zesty blend of citrus, pine, mango, lime.  A touch of peach and a light candy sweetness.  Malt took the day off.  There’s a mild spice note that I want to call… cinnamon and brown sugar.  This one you really have to look for, adding a bit of nuance to a very fruit/pine driven aroma.

T:  Pine resin meets your palate first, followed by subtle water-cracker malt and a wheat-y twang.  The finish reminds me of tonic water (quinine) with a bit of lime thrown in for flavor.  This is not a bad thing, as American IPAs should be hoppy, dry, and bitter.  A great lingering taste of pine, too.  I will agree with some opinions that this gets a little sweeter over time, the malt emerging a bit more, adding balance, but not interfering with the star of the show.

O:  I’ve read reviews calling this “hop water.”  Nonsense.  Though the malt is a little sparse, this brew is meant to showcase the hops, whatever they may be.  The varietals are undisclosed, adding to its mystique and allure.  Fans of a gin and tonic would enjoy this, as would fans of IPAs that are aromatic, flavorful, and on the gentler side of the abv spectrum (this one weighs in at 5.9%) making this one, dare I say it and sound like a Hipster… crushable? 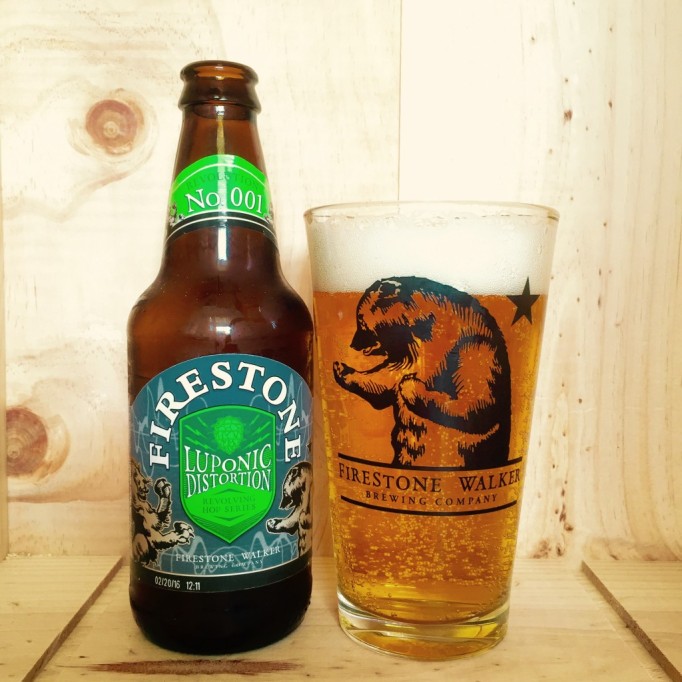